The Good:  Jose Canseco was a much traveled slugger who toiled for six teams over 17 seasons.  The club that teh Cuban-Bonr, 15th round draft pick was most closely associated with was the Oakland A’s, for whom he played nine seasons.

This particular road gem dates to the 1989 season, playoffs and World Series.  What makes it so special? A barrel full of positives:

1.  The wear is superb, even though Canseco was sidelined half the season with a broken wrist.  The identifiers are well puckered, as are teh main Rawlings label, team patch, inner collar seams and NOB plate edges.

2.  The presenceof the black armband on the left sleeve worn during the World Series mouned the passing of Commissioner Bart Giamatti.

3.  The “Battle of the Bay” World Series patch with the felt backing is affixed to the right sleeve commemorating a unique Series delated ten days by an earthquake, and certainly one of the most creative andaesthentically pleaseing WS> patches of the past two decades.

4. Canseco hit.357 in the Series which was swept by Oakland over their cross bay rivals, the San Francisco Giants. 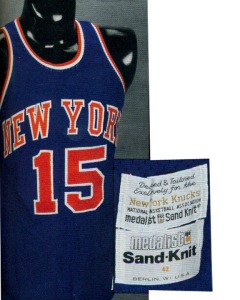 The Bad: Earl Monroe Knicks Jersey: Earl Monroe earned the nicknames “The Pearl” and “Black Jesus” as the consummate showman of the NBA in the 1960′s and early ’70′s.  He thrilled audiences initially with the Bullets and then his play became more team oriented as a championship member of 1970′s New York Knicks.

While his first few seasons with the Knicks saw him wear beautiful knit jerseys, he wore mesh in the mid to late ’70′s and his waning NBA days were spent clad in the horrendous midnight navy and maroon colors that U Penn alum and short lived Knicks owner Mike Burke had instituted after taking control of the franchise.

this royal bluemeshversionis,infact,a Knicksjersey, but couldnothavebeenwornby “the Pearl” duringthe late career.  The dual Sand Knit labels affixed to the lower left front tail are from teh “83-85″ period, used at the earlies in 1982.  Monroes’ final season in New York was “79-80″, well before these labels were manufactured and ready for use.

Additionally, the NOB ” Monroe ” which is cut in proper font style, is more reminiscent of the early-mid “80′s style than the mid late “70s’ in that its letter segment widths are exceedingly broad, and the overall height of each non -ending letter “ONRO” is significantly taller than its “70′s exemplar counterparts.

With a strong probability, the jersey was lettered-up in the mid 80′s time frame for a team function or to honor the recently retired legend, Earl Monroe, but not used in a mid late 70′s NBA game.

The UGLY: Vince Young was a legitimate collegiat hero with the Longhorns, but this home burnt -orange representation was certainly not worn by the star QB, even though it comes with a beautiful silver autograph on the verso. 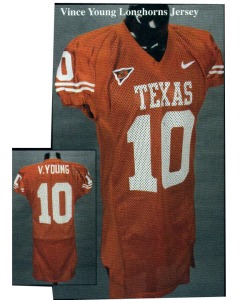 The problem lies in teh NOB and nameplate.  This plates dimensions at 12″ x 3 1/4 are exceedingly small and far different than the standard 3 5/8″ x 17 -171/2″ usually found on the New Millennium Texas jersey’s.  Additionally, teh “V. Young” applicued identifier is 2 3/8″ tall with an average segment width of 3/8′, significatnly smaller to the naked eye and in fact dimensionally smaller when comparedto exemplar norms of 3″ in height and 1/2″ segment width.

The autograph is exceptional as graded by Spence, but its quality does not endorse the jersey as “game worn”.

With high probablility, this jersey is a stock Vince Young jersey delivered to UT by Nike without a nameplate.  Not used in a agmae, it wasprobably lettered up, signed and used as a promotional charitable give-away. The term is onlyused in reference to its gamer status, not its autograph replica status, which, is in fact, wonderful.

This entry was posted on July 29, 2013 by Memorabilia.Expert BidAMI in Authentication Tips.