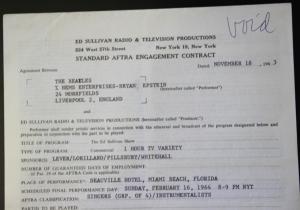 The 8.5 x 11 contract for the Beatles was sent back and forth from NY to England to make sure that all the provisions were correct.  Some corrections needed to be made in regards to the Beatles “Billing” for the show, so they had to VOID this contract once the provisions were corrected.  Hence, the reason for the word “Void” writtein in the right hand corner in blue ball point.

The Beatles were paid $3,500 to be divided among the four band members, plus airfare.  Not a bad deal for the Fab Four performance. 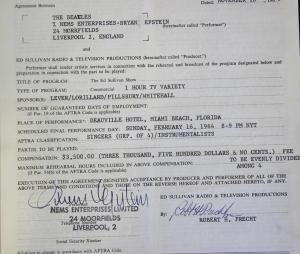 Included with the original contract, other correspondance letters are included.

1.  December 1963 Confirmation of Contracts to Brian Epstein-Stating the Beatles to have Top Star Billing-2 Page Letter-requesting to revise the contract.

2. Jack Babb CBS Letter stating that NEMS Enterprises was going to be filming the concert in Washignton DC for TV purposes, Dated February 14. 1964

This document has fading, toning and is still in tact without any rips or tears.  The contract is connected at the top so you can open it up.  Natural wear on the surface is apparant.