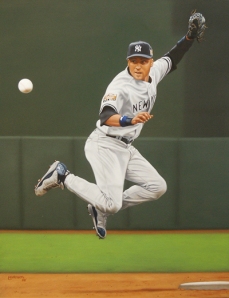 Derek Jeter Voted Greatest Yankee Ever! Check out one of the best Jeter game-worn jersey’s on the market today at BidAMI.com auction and have fun hunting.

Certainly, no one can really compare to the allure of the Babe.  But amongst Yankee fans, there is the same type of adoration for Derek Jeter as there has been with Babe Ruth.

In a recent poll of over 800 New Yorkers, New York Yankees shortstop Derek Jeter was voted No. 1 over Babe Ruth as New York’s greatest athlete.  What do you think? Take our POLL now.

Yes, you read that right. According to voters, Derek Jeter is better than Babe Ruth and Joe Namath also cracked the Top Five.

When I was initially informed of this, the first thought that popped into my head was, “They must have just polled a bunch of 18-to-25-year-old Yankee fans,” because no one older than that and in his right mind would say that Jeter is better than Ruth or that Lawrence Taylor, Mark Messier, Jackie Robinson or Walt Frasier weren’t better than Joe Namath.

Supportive stats show that  59 percent of those polled consider themselves “sports nuts,” and the best Ruth could get was 11 percent (compared to Jeter’s 14 percent).

For collectors, this means that you better get your hands on anything  that Jeter wore, used or touched.  You bet that the values are going to sky rocket just like they have for Ruth collectibles.  In the last couple of years, Jeter memorabilia has gone up 25-40%.

Check out one of the best Jeter game-worn jersey’s on the market today at BidAMI.com auction and have fun hunting.

One comment on “Is Derek Jeter the Modern Day Babe Ruth?”

This entry was posted on September 17, 2014 by Memorabilia.Expert BidAMI in Authentication Tips.