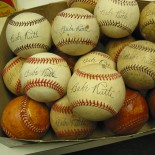 Ted Williams Game-Worn Baseball Cleats: His Sizes Through the Years.

Pictured, we see Williams wearing  RIDDELLS.  This Riddell model cleat was made early on in Ted Williams career, in 1942.  Upon close examination, the tongues on each cleat can safely be  identified as the RIDDELLS style that Williams used.

Seen in the tongue’s of the shoe, underneath the word RIDDELL you will find the letters HB  9 – D

The other cleat will have the same markings except it will be marked HB 9 with a small 2 in the corner. What does that mean?   The number “2” is a half size designator.  Hence, the one shoe is a half size bigger than the other one.  Ted Williams was known to wear two different size shoes.   Williams’ daughter stated that “my father would buy two pairs of different size shoes the same shoe but in two different sizes. I don’t know what he would do with the other shoes he would have to buy in a pair.”

These cleats have vintage clay on the bottom of them.  The number 9’s on the tongue and the Ted Williams printed on the bottom of the shoes, when examined with a digital microscope  appears vintage.   The shoes also appear very vintage and shoe obvious wear.

I have a closet full of shoes from my earlier years, yes, they are still in the closet, and they are a smaller size than what I wear today.  I wish I could wear them, but it looks they will be going into the donation bin.  But as for Ted Williams,  coming in as a gangly teenager, he would have obviously still been growing and wearing a smaller size cleat than what he ended up wearing late in his career.

Now research and photo style matching can aid in our examination of these cleats, however, what really seals the deal is the provenance.  In the particular case of these Riddell size 9 and 9.5 cleats, they were obtained by a prominent Knicks basketball equipment manager, who was one of Ted Williams greatest fans.

Our research supports that Ted Williams, changed shoe sizes throughout his career.  He wore 2 different sizes, and we don’t know what he did with the extra shoes.   Check out our current auctions or check out other items that have been authenticated by 100% Authentic.